This is in response to the article/tweet thread called, “Please stop erasing trans men from trans issues”

Ok, so here’s my issues with these two responses. Bottom response first: 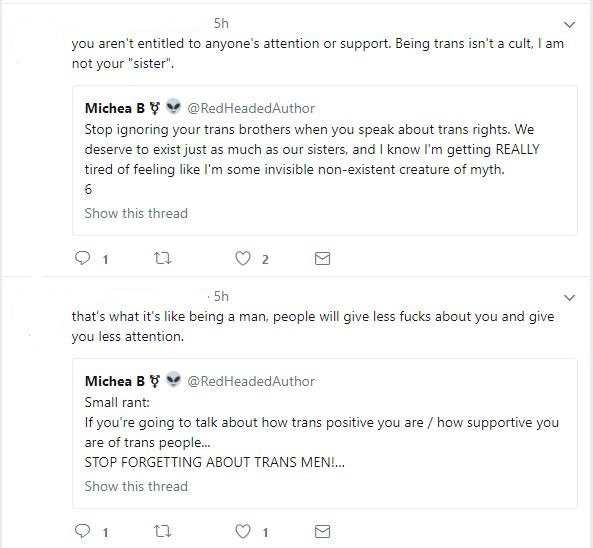 Saying this continues to uphold and keep the status quo that harms men (cis and trans). This gives fuel to TERF’s lie that trans women are just men who want attention/things to be easy. Even though that is an outright lie, stuff like this gives them “sound bytes” to use and to twist to fit their narrative. This CAN be misconstrued as trans women using male privilege (which they don’t have) to shut down trans men speaking up about their issues.

This is a silencing tactic being used by a trans woman to shut down the issues trans men are facing.

Remember, if you’re only supportive of ONE part of the issue, you’re not actually supportive of the issue. You’re a salad bar supporter. You’re picking and choosing only to support the things that affect you, which shows MASSIVE privilege on your part.

On to the top response (since Twitter gives them newest to oldest). Please scroll up if you need to check again for what was said.

Never once did I say this is a cult. But thank you for spouting TERF and “gender critical”/anti-trans rhetoric. I see post video after article to people fucking SAYING THIS TO ME over and over. I’m constantly told I need to care about my “trans sisters”. I’m constantly told that feminists need to care about their trans sisters and not just cisters.

If you suddenly take offense to the term being used because a trans man is using it, please see my previous points about the status quo and salad bar support.

Seriously, I could not have asked for a better example of silencing tactics, attempt at erasure, usage if TERF rhetoric, upholding of the status quo, sounding like a stereotype/giving fuel to TERFs, and salad bar support than these two tweets.

Bottom line is this:

Trans men are constantly being silenced and erased/looked over.

This happens not just by cis people, as you can see.

Yes, we DESERVE recognition and a say in what happens in the trans community and when it comes to trans rights. If you’re someone who believes only trans women deserve recognition and a say in what goes on for trans people, then kindly take the nearest cactus, lube it up, and go fuck yourself. I got shit on while trying to live as a woman for being vocal about my issues, and as a trans man I get the very people who I have fucking fought for trying to silence me.

Guess what, I’m not going to be silent, not any more.

2 thoughts on “Erasure of trans men in the trans community”